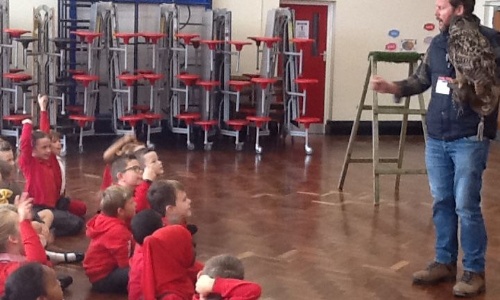 The Welsh Hawking Centre visited the school as part of our 'Flight Engineers' topic.

They brought some of their birds with them to show. There was a Tawny Owl (the only owl that actually says "Twit Twoo")  a Peregrine falcon (the fastest bird on the planet) and a Long Eared Owl (whose tufts of feathers are not actually ears).

The birds of prey were allowed to fly up and down the hall and were able to land on our arms to catch their food-when they weren't nosing out the window at the seagulls and cats!

We learnt that the reason humans ever became interested in flying was from the creatures in nature. It certainly has inspired us to create flying machines of the future. All of the children in Year 3 and 4 were exceptionally well behaved and showed the greatest respect for the birds. Well done!